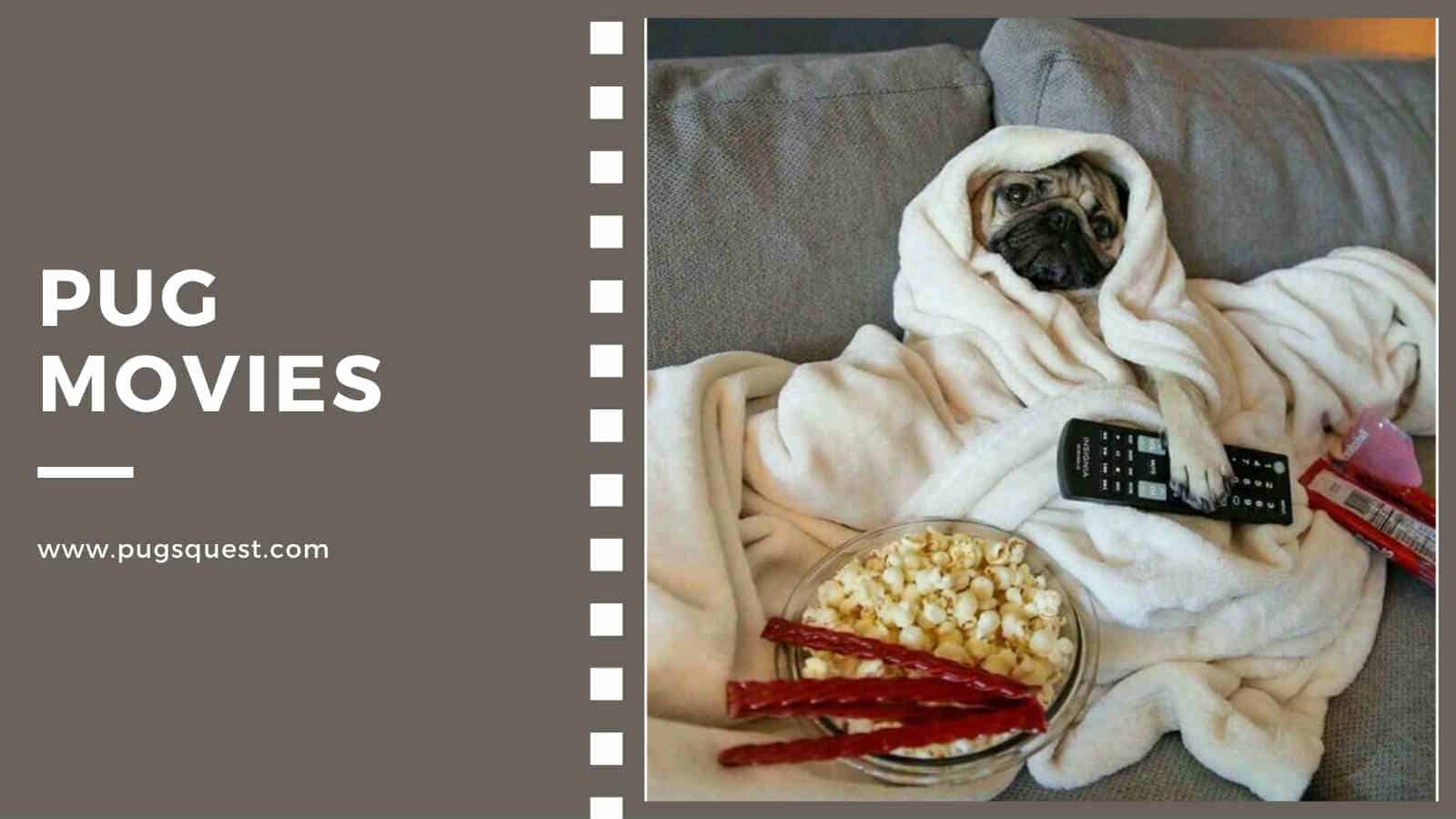 Do you jump for joy every time a Pug makes a movie appearance? Does a Pug on the big screen make your heart skip a beat?

If the answer is yes, then you’ve come to the right place.

We’ve got your Friday nights and chilled-out weekend plans booked up for the foreseeable future thanks to these 10 heart-warming, nostalgia boosting, Pug movies for all the family.

So start getting the popcorn ready and curl up on the couch with your precious pooch for an epic pug lover’s movie marathon.

This charming, family-friendly British comedy film is one of our favorites. Why? Because Patrick the Pug isn’t just a cameo.

He’s the star of the show. Patrick recounts the story of a young woman named Sarah. Sarah has been going through a bit of a rough patch in life.

Another family favorite, The Secret Life of Pets is a fun-filled animation set in none other than NYC itself. This one is for comedy lovers. And animals of all kinds are the stars of this show.

Max is a terrier living in the Big Apple. When his owners bring home an unruly stray, Max’s life is turned upside down and inside out.

But what about the Pugs?

You won’t be disappointed. Max’s friend, Mel, is a wonderfully comical portrayal of a Pug with no quirk left unturned.

We think you’ll love this truly classic movie. Narrated by Dudley Moore, this 1986 movie recounts the adventures of a kitten and Pug puppy as they find themselves lost from their home in Japan.

This is a poignant movie of friendship, struggle, and resilience. Plus Milo and Otis are insanely cute if I do say so myself.

Kids (and adults for that matter) will go crazy for this action-packed, laughter-inducing movie. The Nut Job tells the tale of an exiled squirrel who decides to raid a nut store with the help of some friends from the park.

Well, it soon transpires that this nut store is a front for a human gang’s bank robbery. And that’s how we meet Precious, a lady Pug owned by one of the criminals.

Starring Will Arnett and Brandan Fraser, we think kids will love this movie.

This movie cult classic usually cites Will Smith as the star of the show. But these movie reviewers have clearly never met a Pug lover.

For us, Frank is the undisputed hero.

Many Pug owners would swear their little friend talks. Well, Frank actually does.

Frank makes numerous appearances throughout both films. This well-dressed Pug plays an extraterrestrial in disguise and is responsible for some of the most memorable lines.

If you like Will Ferrell movies, you’ll love the Campaign. This political satire starring Will Ferrell and Zach Galifianakis tells the tale of two North Carolinian congressional candidates vying for a seat in Congress.

Marty Huggins (Zach Galifianakis) owns two adorable Pugs, Mittens, and Poundcake. Aside from their fantastic names (I might have to name my next Pug after a dessert now) the Pugs add some unforgettable humor to this great movie.

We highly recommend (but keeps the kids away for this one) as it’s R-rated.

The Big Wedding tells the tale of a long-divorced couple who pretend to be married for a family wedding.

As unashamed Pug-lovers, we might all recognize ourselves a bit in this movie. The family house is home to two precious Pugs and brimming with kitsch Pug memorabilia.

Plus the star-studded cast makes this a really feel-good film. Perfect for brightening any rom-com obsessed, Pug-lover’s day.

This 2008 movie takes a look at the life of famous fashion designer, Valentino. Did you know that Valentino was absolutely, head-over-heels, obsessed with Pugs?

Well, it’s true. Makes you like him even more, right?

The documentary-style film shed light on Valentino’s fascinating life and career. If you think you spoil your Pug, think again.

This fascinating docu-film is definitely worth a watch.

This Disney classic is a childhood favorite for many. It famously tells of the romance between an English soldier and the daughter of an Algonquin chief, after English colonists invade 17th C. Virginia.

Not only is Pocahontas a timeless classic, but it features Percy.

Percy is a posh, pampered, Pug from England (he even has his own bathtub). The heartwarming friendship that develops between Percy and Pocahontas is truly magical.

Starring Colin Firth and Samuel L. Jackson, Kingsman tells the story of a spy organization that recruits a talented street kid (Eggsy)  into their training program, just as a global threat emerges from a tech genius-come-criminal mastermind.

What’s more, the recruits are made to pick a puppy. And guess what? Egssy picks a super cute Pug (thinking it’s a Bulldog) called Jack Bauer.

Jack Bauer (or JB for short) became an instant success after this film was released and even attended the premier party of Kingsman 2!

This one is for the action lover.

Have you been watching Netflix’s popular series?

Everyone’s been raving about The Crown lately. And Pug-lovers will have noticed the appearance of some seriously cute royal pups.

The Queen might be in love with her Corgis, but Edward VIII is totally ga-ga about Pugs. We even catch a glimpse of him and his wife Wallace Simpson hosting a Pug birthday party

Learn how to get along with Pugs with exclusive tips and insights that I only share with my private newsletter subscribers.