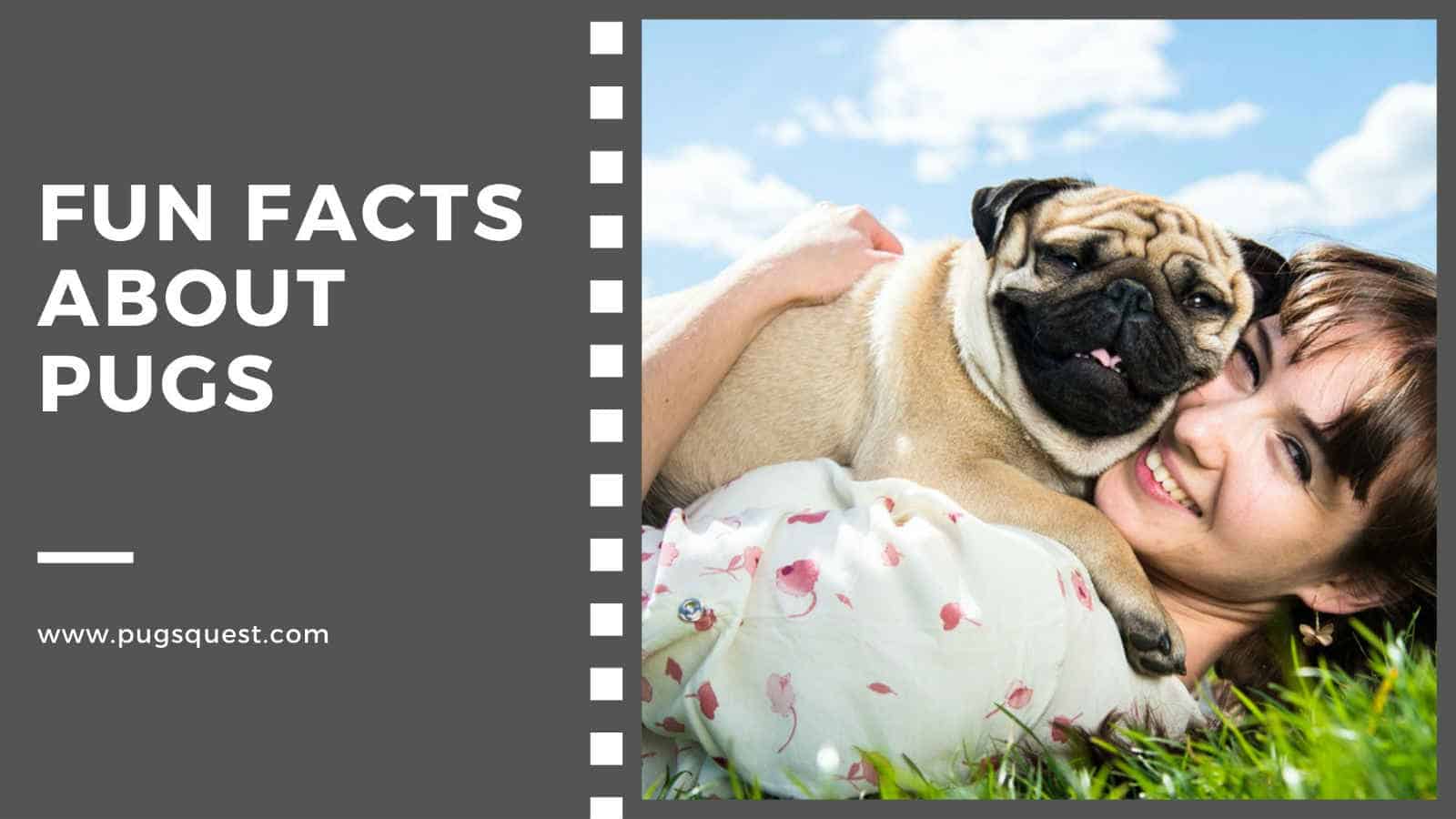 Your Pug isn’t just a pretty face. In fact, the Pug breed is one of the most interesting out there. Not only is this an ancient breed, but Pugs have many interesting facts to their name.

If you’re a Pug fanatic – or just keen to find out more – then this is for you!

We’re going to tell you a whole load of fun facts about Pugs.

So grab a drink, relax, and get ready to enjoy the many wonders of this precious pooch.

1.  Pugs are the largest of all the toy dogs

Despite being only small, Pugs are the largest breed in the ‘toy’ category. So move over Chihuahua, the big boys are in town.

2.  Pugs are not related to bulldogs

Contrary to popular belief, Pugs aren’t actually related to bulldogs. They’re both wrinkly but that’s about all they have in common.

Pugs are actually most closely related to the Pekingese.

3.  Pugs are an ancient breed

Pugs go back a long way. The breed can be traced back to 400 BCE in ancient China where Buddhist monks kept them as pets in Tibetan Monasteries.

Ancient Chinese emperors became very fond of these flat-faced dogs and so breeds like the Shih Tzu, Pekingese, and Pug were bred for their popularity and high regard.

No fine treatment was spared for these canines – some of which even had their own personal guards!

5.  Pugs were the official dog breed of the House of Orange

During the Early Modern period, Pugs became popular amongst the European royalty. The Dutch Prince of Orange is thought to have had a beloved Pug called Pompey.

So the story goes, one day the Prince of Orange dreamed that his Pug saved him from Spanish assassins.

And from then on the Pug became the official dog of the House of Orange.

As companion dogs through and through, Pugs are emotionally sensitive. They pick up on our feelings and want nothing more than to please us.

Because of this, the Pug has been given some unusual nicknames. They are often called ‘shadow’ or ‘velcro dogs because they can almost always be found by their master’s side.

7.  A group of Pugs is called a grumble

A group of Pugs is called a grumble. It is thought that this can be traced back to the Dutch word for Pug (‘mopshand’) which also means grumble. 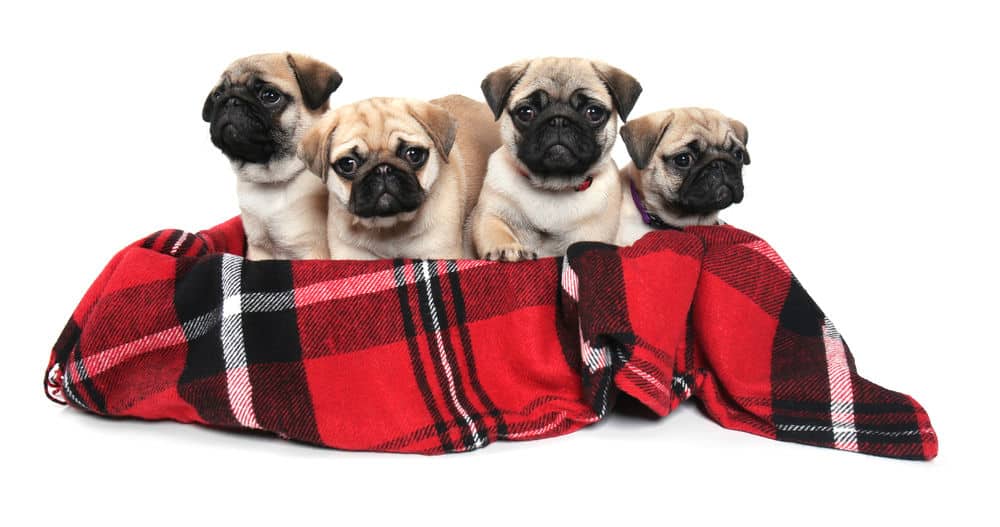 8.  Pugs have many different names around the world

Pugs are popular all over the world. And that means they go by a lot of names. In China they are Lo-sze. The Spanish call them Doguillo.

And the reward for the cutest name of all goes to Finland, where Pugs are better known as Mopsi.

Some people think that the Pug was named after the Marmoset monkey. This is because the two animals have been observed to share similar facial expressions.

In the early 18th Century when lots of Marmosets were being kept as pets, these monkeys were also known as Pug monkeys.

10. Only one Pug has won at Westminster

There’s only ever been one Pug Best in Show winner at the Westminster Kennel Club dog show.

This was in 1981 when a fabulous three-year-old Pug called Chucky took the title against over 2910 other dogs. Well done Chucky!

11. One has won the World Dog Show too

Pugs have also made their mark on the world stage. In 2004 one special Pug won top-title at the prestigious World Dog Show.

Unlike most dogs, Pugs aren’t lovers of the water. And most don’t like swimming all that much. It doesn’t mean that they can’t. They just probably won’t want to.

In fact, their top-heavy body composition makes swimming a little tricker. So don’t be too hard on the little guy.

13. Many Pugs have an underbite

Love it or hate it, many Pugs have an underbite. Their lower teeth will often protrude due to their small faces. There’s usually no harm in this – just lots of amusing expressions.

The gestation period for a Pug mom is usually between 58 and 68 days and mama Pugs can sometimes have up to nine puppies at a time.

15. The Pug is a low maintenance breed

Pugs are great apartment pets. They don’t need too much space, require only moderate exercise, and like nothing more than snuggling up on the sofa with mom and dad.

That’s right. Pugs do not require much exercise at all. Between 20 and 30 minutes per day is plenty.

In fact, more than that, and your Pug may become overexerted.

We usually recommend splitting your Pug’s walkies up into two short chunks. One in the morning and one in the evening.

Pugs are what is known as a brachycephalic dog breed. These dogs can be easily identified due to their flat faces.

And whilst this is hella cute, brachycephaly can be problematic. Pugs and other Brachycephalic dogs struggle to regulate their body temperature. When summer comes around be sure to turn on the air-con.

18. Because they can’t cool the air they breathe

Part of the reason why Pugs cannot regulate their body temperature well is that they cannot actually cool the air that they breathe.

That means you might notice your Pug becoming restless or panting more in warmer weather.

19.  A tail with two curls is considered perfect

Every Pug is cute in its own special way. But in the Pug modeling world, it’s the double curled tail that gets hearts racing. A double curl is a big plus for Best in Show.

20. There’s a Pug in America with an MBA

I bet you weren’t expecting this. Did you know that in America there is a Pug with an MBA?

Yes, you heard right. A Pug with… an MBA!

Chester the Pug was awarded the online graduate degree in 2009 from Rochville University with a 3.19 GPA (but, shhh, don’t tell anyone he paid for it).

21. A Catholic fraternity chose a Pug as their symbol

In the 1700s the Pope banned Catholics from joining the Freemasons (a fraternal organization).

So what did they do?

They started their own club instead. And so was born the Order of the Pug, complete with a porcelain ‘Grand Pug’ and some rather wacky rituals.

Did you know that Napoleon’s wife had a Pug as a pet?

Josephine Bonaparte had a little Pug named Fortuné. She reportedly loved her loyal companion so much that they slept together in the same bed.

Legend has it that Fortuné bit Napoleon on their wedding night.

23. And so did the British royals

Josephine wasn’t the only historic figure to pine after a Pug. In fact, Pugs have been a popular pet for the British Royals too.

The Queen may be known for her Corgis, but Queen Victoria was Pug crazy.

Most Pugs weigh somewhere between 14 and 18 pounds, but those with a healthy appetite have been known to reach heights of 38 pounds.

Pugs love food, and they have a propensity for weight gain if not moderated.

25. Pugs are born to be companions

Pugs were bred as companion dogs and this is reflected in their loving personalities.

Pugs love being by their owner’s side and will be up for pretty much anything as long as you’re there too.

Most Pugs sleep… a lot. Don’t be surprised if your little dude naps up to 14 hours per day. This is completely normal. If only we could do the same!

27. In some very funny positions

And when they nap, they do it in style. Pugs sleep in the weirdest positions. Sitting up, mouth agape, flat out like superman… you name it a Pug has done it.

28. And they snore… very loudly

If you think your husband is a loud snorer, wait till you hear a Pug.

Due to their flat faces, Pugs are prone to snoring… very loudly indeed. They may be small but their snoring certainly is not.

29. But that doesn’t make them lazy

Despite their unrivaled love of naps, Pugs aren’t actually a lazy breed. As long as there are plenty of curiosities to uncover, your Pug will be up and about, active and exploring.

Did you know that Pugs have been mixed with Huskies? This particular cross-breed is very rare but extremely sought after.

Perhaps the most royal of all royal pets is the Corgi-Pug mix. Queen Elizabeth meets Queen Victoria here. As you might imagine, this hybrid breed is incredibly cute.

32. A Pug Poodle mix is called a Pugapoo

And the award for the best name goes to…Pugapoo. This adorable word was the name given to a mix between a Pug and a Poodle. And, yes, it is as cute as it sounds.

In general, female Pugs tend to live a bit longer than their male companions.

A Pug’s coat doesn’t require too much maintenance. Just some regular brushing and a wash from time to time will do. And don’t forget to wipe between those folds as often as possible.

They may be low-maintenance when it comes to caring, but a Pug’s coat can shed a lot.

Because of their double-layered coat, Pugs shed all year round and fawns tend to shed a little bit more than black Pugs. So get the hoover ready.

Pugs have notoriously stubborn personalities. As such, it can take a bit more patience to train them.

Pugs get bored easily. Especially if tasks become too repetitive. They also get distracted by… well… everything. But don’t worry. They will get there in the end.

Here’s a fun story for you. In India, there is a famous Pug called Cheeka.

Cheeka is a mascot for Vodafone India, making Pugs a common scene on billboards and in advertisements.

Pugs are wrinkly. And they were bred like this on purpose.

Some say that breeders were trying to create a pattern on the Pug’s forehead that would resemble the Chinese character for ‘Prince’.

39. Pugs come in many color variations

Black Pugs and fawn Pugs are the most well-known color variations but there are more unique colorations as well like tan, caramel, silver, and brindle.

Pugs appear on the screen more than most dogs. These little dudes have appeared multiple times in hit movies and popular culture.

Movies and shows like Men in Black, Milo & Otis, and The Secret Life of Pets all feature prominent Pugs.

More recently Netflix’s series The Crown shows Pugs in all their royalty.

Although this might sound like a cool party trick, this is actually a very serious medical problem.

Pugs have large protruding eyes naturally, but sometimes their eyes can actually pop out of the socket.

This is called ocular proptosis and usually occurs as a result of trauma to the eye.

It’s not all that uncommon that your Pug will let you play dress-up with them.

Whilst you should never force your Pug to do something they don’t enjoy, if you get the Pug okay then why not indulge?

The Pug’s cute, squishy face makes them perfect for almost any costume. 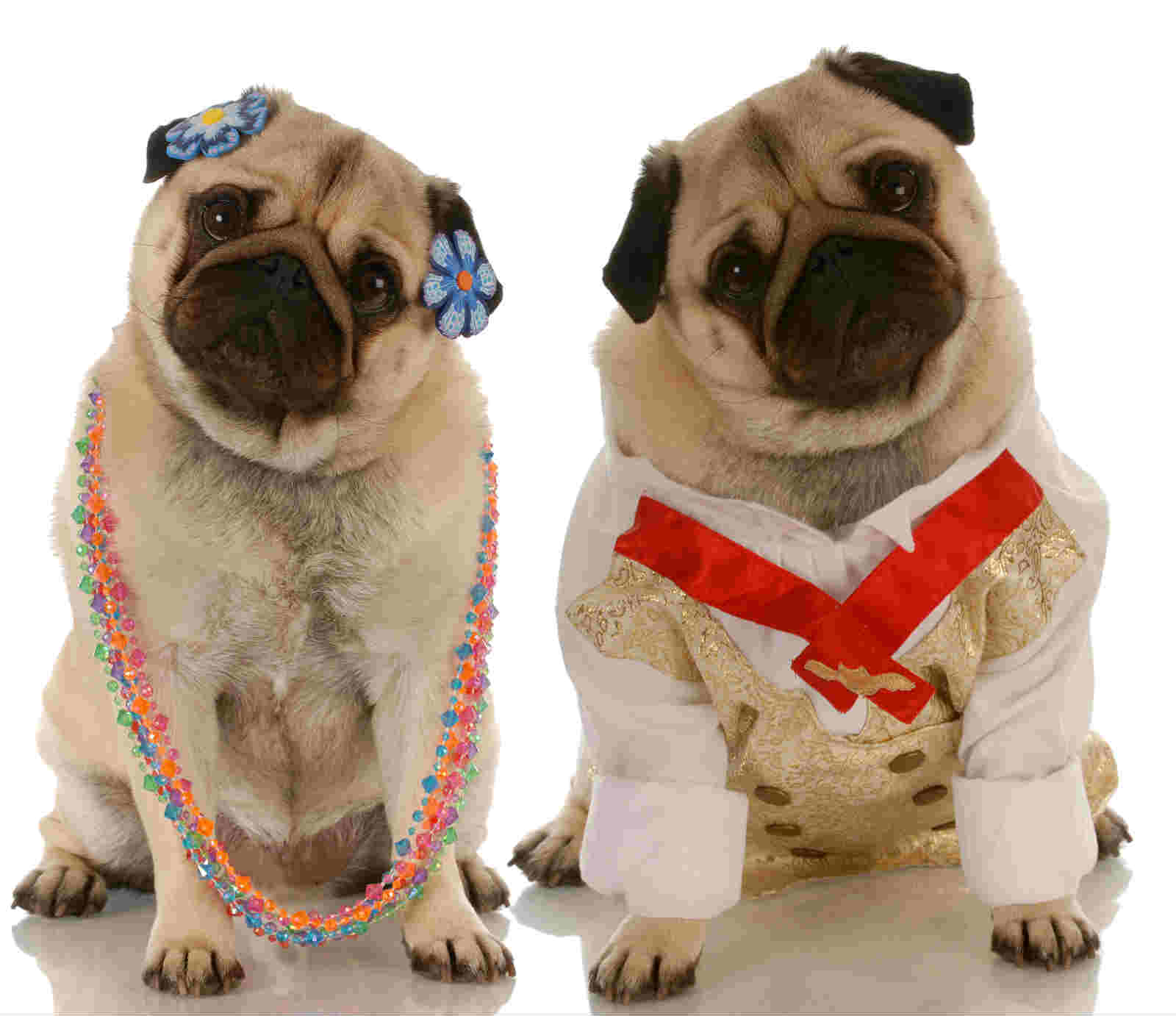 Pugs in all their glory

So there we have it. The wonderful 42 fun facts about Pugs.

Who knew there was so much to learn about these little dogs.

They certainly deserve their Latin name ‘multum in parvo’ – a lot in a little.

We are a participant in the amazon services LLC associates program. As an amazon associate, we earn affiliate commissions from qualifying purchases.

We are a Chewy affiliate, we earn commissions from qualified purchases.